At the Voter's meeting on January 23,  the voters approved calling both a Spanish-speaking pastor and an English-speaking pastor.  We are excited that the Lord has led us to expand our outreach to the Hispanic community near St John.

The Spanish-speaking WELS pastor (who also speaks English) would provide community outreach to our Hispanic neighbors, work with CLUES in developing a stronger relationship with them, and work with the new Christian Life Ministries (CLM) Pregnancy Counseling Center and Hispanic bible study group at St John.  These would be his main duties until his outreach efforts are well underway.  He would eventually become our permanent pastor.
The semi-retired English-speaking WELS Pastor would minister to our English-speaking members and community, conducting Sunday services, weddings, funerals, and baptisms to our St. John membership.  He would also mentor the Spanish-speaking pastor in the administrative aspects of the ministry and provide a bridge for that Spanish-speaking pastor in becoming the primary pastor at St. John.  This call would be for 5-10 years.
We thank those who were able to attend this voter's meeting and for giving their input.
A Call meeting is scheduled for February 13, after our Sunday service in the Fellowship Hall.
Posted by Jan Tholl at 12:31 PM No comments:

1 Peter 3:15 Always be prepare to give an answer to anyone who asks you to give a reason for the Hope you have.

The English word “Hope” seems like cotton candy in a wind storm - it’s easily torn apart and scattered. It seems frail because, in our English vernacular, it is a desire or a wish.

Is that the hope that we have as believers? Is that what the Bible expresses in 1 Peter 3:15, “the hope that we have?” Is the hope we have in CHrist Jesus easily broken down, torn apart and scattered to the four winds? The Merriam-Webster definition of “hope” is this: “to want something to happen or be true and think that it could happen or be true.”

Biblical hope is based off of a real thing - A Fact! Its confidence relates to reality and not a feeling or a desire. The English version of “hope” is a desire for something to happen or for something to be real. “I hope that the rain will hold off, but I don’t know if it will or not.” That English understanding of “hope” is very frail and lacks substance.

In Greek, the word “hope” starts with an actual fact or an occurrence and from there we build the trust a person has in that occurrence. So according to the Isaiah 61 passage for this weekend, we “hope” for good news that comes from the lips of God BECAUSE it actually happened in time.

The Spirit of the Sovereign Lord is on me, because the Lord has anointed me to proclaim good news to the poor. He has sent me to bind up the brokenhearted, to proclaim freedom for the captives and release from darkness for the prisoners, to proclaim the year of the Lord’s favor and the day of vengeance of our God, to comfort all who mourn, and provide for those who grieve in Zion. (Isaiah 61:1-3)

Jesus’ historical words and actions secured a freedom for women bound by guilt and release for men chained up by the shame of regrets and mistakes. That actual event which secured their “hope” happened whenever Jesus declared, “Neither do I condemn you; go, and from now on sin no more.” (John 8:11)

Jesus actually secured a real position on which hope could be built when He, of His own accord, lived all of God’s Laws in a just and complete manner, even down to the tiniest of all God’s requirements. That actual, real living out of God’s Laws secured an account of right activities that each believer accesses by faith. Jesus’ innocent shedding of blood was used to cover over all that humanity did incorrectly. That real death of the Son of God is the fact that our hope is built upon - that gives our captive hearts release. Our souls have been sprung from Hell’s firm grip; those chains have been broken by His death.

Now every day we live, we live in that rock solid truth and base our living on that truth. Yes Jesus really needed to die because my sins are that bad; and He did die. So we are now free. Yes, I could not fulfill all of God’s requirements so Jesus took my burden and your burden and lifted it on His shoulders. Each breath He breathed was done in perfect obedience to the Father’s will; all those perfect actions freed my labored soul from appeasing God.

That is the Hope on which we firmly trust.

So when we read the promise of Isaiah and the fulfillment of Luke 4, we are witnessing the building of a rock solid hope:

And he came to Nazareth, where he had been brought up. And as was his custom, he went to the synagogue on the Sabbath day, and he stood up to read. 17 And the scroll of the prophet Isaiah was given to him. He unrolled the scroll and found the place where it was written,

because he has anointed me

to proclaim good news to the poor.

He has sent me to proclaim liberty to the captives

and recovering of sight to the blind,

to set at liberty those who are oppressed,

19 to proclaim the year of the Lord's favor.”

20 And he rolled up the scroll and gave it back to the attendant and sat down. And the eyes of all in the synagogue were fixed on him. 21 And he began to say to them, “Today this Scripture has been fulfilled in your hearing.” (Luke 4:16-21)

May God bless you as you transform your understanding from the English word, “hope” to the rock solid Greek version of “hope” which is based on fact! This is not wishy washy and flighty. This hope we have is already accomplished for us and by faith we firmly hold onto it. 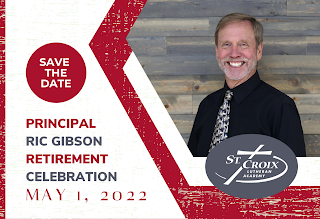 Join us on Sunday, May 1, 2022
as we celebrate the ministry and retirement of Mr. Ric Gibson.

Learn more and RSVP by March 15

Congregation Meeting is scheduled for this Sunday, January 23rd, following our worship service.
All members should plan on attending.

What is eternal life?

It is that time again when we encounter the change from the old year to the new.  For some, the ushering in of a new year is a ritual of staying up until midnight to make a bunch of noise or perhaps sing an old song. Yet, one way or another, the beginning of a new year is a time of reflection and planning. We take stock of what happened in the last year. We think of our pains, regrets, joys, surprises, births, and deaths. We also look to the future and ponder what we want to do differently in the days to come.

In all of our planning, though, there is this unalterable fact that life here will end. Our time is finite. It has a limit. In fact, everything about this world has a limit.

The Bible tells us of one thing, however, that has no end. Referring to those who follow him, Jesus said, “I give them eternal life” (John 10:28). In view of our knowledge and experience of limited life in this world, we wonder what eternal life is.

Jesus explains, “I tell you the truth, whoever hears my word and believes him who sent me has eternal life and will not be condemned; he has crossed over from death to life” (John 5:24). Life is being connected to God and his blessings. The opposite is death, which is separation from God and his goodness. All people are born separated from God because, by nature, they are sinners. As a result, they are headed toward an eternal separation from God to be condemned in a very real place called hell.

But God did something very great. He sent the world a Savior who is Jesus Christ, the sinless Son of God. In an unmatchable act of love, Jesus placed himself under our condemnation for sin. He willingly suffered the death sentence that all of us deserve.

Through Jesus, God has forgiven the world’s sin, which separated people from him, and he gives the gift of eternal life. All who listen to the Savior and believe in God who sent him have eternal life. By faith in the true God of salvation, they have crossed over from death to life. They do not face the fear of separation from God, but they rejoice in a close and blessed relationship with him now and forever.

What a great way to start a new year! We have the confidence that no matter what has happened in days gone by, and whatever the future holds, our life with God is secured forever by faith in Jesus.